Skip to content
Is There a ‘Most Optimal’ Treatment for Frozen Shoulder? [Research Review] 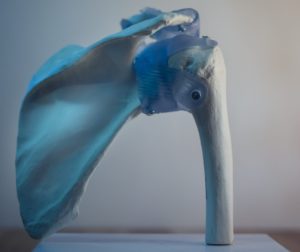 Is There a ‘Most Optimal’ Treatment for Frozen Shoulder?

1) Manipulation under anaesthesia, 2) arthroscopic capsular release and 3) conventional physiotherapy with steroid injection are all effective in improving shoulder function and pain in patients with frozen shoulder. Capsular release carried higher risks and much higher costs, while physiotherapy with steroid injection had more patients who needed further treatment. Manipulation under anaesthesia the most cost-effective treatment based on QALYs per dollar spent.

Apart from conventional physiotherapy, manipulation under anaesthesia and arthroscopic capsular release are two alternative treatment methods for frozen shoulder. However, they tend to be more invasive and costly. There is also limited evidence to suggest that those two interventions are superior to regular physiotherapy with steroid injection. Hence, the purpose of this study is to directly compare and investigate which of the three interventions is more optimal in improving shoulder function and pain.

All outcome measures were collected at baseline, 3 months, 6 months, and 12 months after randomisation.

*surgeon manipulated the affected shoulder to stretch and tear the tight capsule while the participant was under general anaesthesia, supplemented by a steroid injection. Twelve sessions of conventional physiotherapy was provided afterwards.

**surgeon surgically divided the contracted anterior capsule in the rotator interval while participant was under general anaesthesia, followed by manipulation with optional steroid injection. Twelve sessions of conventional physiotherapy was provided afterwards.

***mobilisation techniques and a graduated home exercise programme supplemented by a steroid injection. 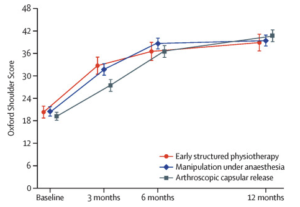 All three treatments showed substantial improvements in patient-reported shoulder pain and function. None of them were clinically superior. Arthroscopic capsular release resulted in the least number of further treatments but carried higher risks and much higher costs. The early structured physiotherapy with steroid injection had more patients who needed further treatment, making manipulation under anaesthesia the most cost-effective treatment (at a threshold of £20 000 per QALY)

It appears that surgical procedures have similar clinical outcomes when compared to early physical therapy. For patients who wishes to shorten the number of follow-up treatment and is able to afford the higher costs, capsular release is a good option. Conversely, for patients who prefers more conservative treatment method and is comfortable with longer follow-up duration, early structured physiotherapy with steroid injection is an ideal intervention to recommend. Manipulation under anaesthesia is suitable for patients who desires the most cost-effective treatment in terms of QALYs per dollar spent.