The US Physical Activity Guidelines recommends at least 150 minutes of moderate to vigorous physical activity (PA) per week. PA is known to bolster immunity against several diseases, and prior research have demonstrated the protective effect of PA against various forms of viral infections. However, it is not known if PA confers similar benefits against the COVID19 virus as well. 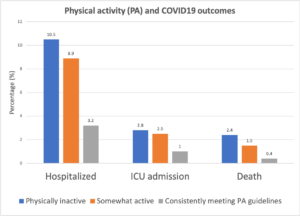 The higher the level of physical activity prior to COVID-19 diagnosis, the lower the odds of hospitalization, ICU admission and death.

This study is a useful piece of evidence that personal trainers and physiotherapists can use to further convince our clients/patients that exercise has a powerful, protective effect against transmissible diseases.

It is worth taking note that when conveying the results of this study to clients/patients, using fear appeal (i.e. choosing to report the negative effects of not exercise) may not be constructive, as shown by behavioural change research. A reward-based approach (i.e. choosing to report the benefits of exercise) tends to be more effective, and leads to longer-lasting changes in exercise routine.